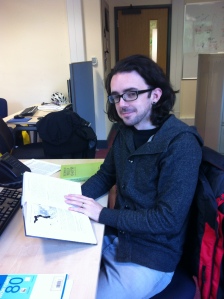 Hi, my name’s Nick and I’m joining the Palaeoenvironmental Change Research Group as a PhD student on a NERC funded project looking at the response of tropical forests to past changes in global climate.

I’m excited to be going off to Ecuador in November (with Encarni and Will) to undertake the sampling of lake sediments around the Estación Biológica Pindo Mirador and the National Park of Cayambe Coca, from which I hope to be able to determine changes in the ecology of the mountainous flora of the Andean regions of Ecuador during the last glacial and current interglacial periods.

Before starting at the OU I undertook a BSc in Geological Sciences at the University of Plymouth and an MSc in Palaeobiology at the University of Bristol working on the palaeoecology of lower Cambrian trace fossils in brackish water environments in an attempt to constrain the evolution and radiation of early metazoans.

I’m thrilled to be starting at the OU and am looking forward to splitting my time trekking through tropical rainforests and staring at microscopic pollen in a lab in Milton Keynes.

To date I have published one scientific paper, I hope to produce many more over the next few years…