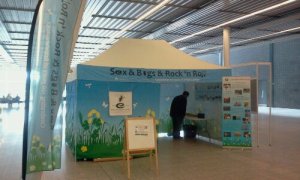 Sex & Bugs & Rock n Roll at INTECOL: The BES sponsored tour of music festivals (http://www.besfest.org) landed at INTECOL. David Price from Science made Simple (http://www.sciencemadesimple.co.uk/) arrived on the Wednesday day afternoon to show what can be achived with professional science busking.

As a palaeoecologist when I came back to the UK from my post doc in Florida I started to get involved with the British Ecological Society (BES) so I could meet neoecologists. Eight years later I am still involved in the society and delighted that the theme of the society’s centenary celebration meeting focuses on change through time: Into the next 100 years. With 11 plenary lectures, dozens of parallel session, hundreds of posters and other activities including Pecha Kucha talks, workshops, field trips and trade stalls I will restrict my post to my thinking about the theme of timescales and the broader messages I got from the meeting. 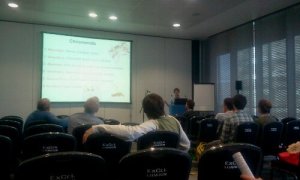 One of the great challenges as a “palaeo” person is intergrating timescales. I was asked a number of times during the INTECOL meeting “what timescales do you work on?”. The answer is “many” (ranging from multi-millennial to annual) but within a relatively short time window, geologically speaking, the Quaternary (last 2.6 Ma). A number of presenters tackled the intergration of timescales in ecology in a variety of ways. Examples included Lydia Cole showing pollen diagrams from Sarawak (Borneo), Elena Cantarello looking at modelling change in tropical dry forests through time, and Bo Dalsgaard linking rates of Quaternary climate change to biodiversity.

In addition to the talks I attended a number of workshops. Of particular interest was Jane Buntings “bridging the gap” sesson was aimed at linking palaeo ecologists and policy makers. Erik Buchwald kicked off the session with a case study of how palaeo work has directly environmental influenced policy in Denmark for the last few decades. Timescales and relevance of data were raised as key obsticals.

The Royal Geographi Society Biogeography Research Group sponsored symposium organised by Richard Field was one of the few which I attended from start to finish. The biogeography keynote discussed ecological change on the long-term and was delivered by Rob Whittaker who examined the relatedness of island flora and fauna on a number of archipelagos. He showed that species despersed to the nearest islands first and ‘hopped’ along chairs as the emerged and sank back into the ocean over millions of years.

Over the duration of the meeting I was struck by the many examples of neoecological studies attempting to understand change in ecosystem process and services without a long term (>50 year) prespective. In contrast the few palaeoecological studies presented demonstrated the dynamics of ecological systems over 100-1000 year timescales; but rarely were able to resolve down to decadal resolution. I see the time scale gap between neo and palaeo of studies is a key challenge for the ecological community over the comming years, especially as the community seeks to develop reseach outputs that are relevant to global concerns expressed through international bodies such as the Intergovernmental Panel on Climate Change (IPCC) and the new Intergovernmental Platform on Biodiversity and Ecosystem Services (IPBES). The intergration of these types of studies and presentation of the data in an intergrated and digestible manner was most clearly achieved at INTECOL by John Dearing.  John presented a case study from China which showed how neo and palaeo ecological data can be combined with social historical data to provide a comprehenisve picture of resource use and the impact of changes in landscape management. Hopefully over the comming years further studies along these lines can be produced which will provide relevant long-term ecological data to inform descision making on a changing planet.

Next BES meeting will be jointly held with the Societe Francaise d’Ecologie in Lille 10-12 December 2014.
Next INTECOL meeting in Bejing China during 2017