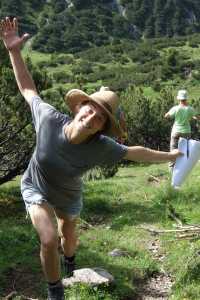 In the 4th edition of our “Amsterdam Paleoecology Club” (APC), we discussed ‘A 6900-year history of landscape modification by humans in lowland Amazonia’ by Bush et al. (2006)1. The high-resolution record presented in this paper shows impressively that what we might perceive as native rainforest today could rather be a since a long time actively modified landscape.

The chronology from Lake Sauce (Peruvian Andes) suggests a continuously forested landscape under significant anthropogenic impact over the last 6900 years. Indicators of human activity are taken to be the varying presence of crop pollen (Zea mays) throughout the record, combined with the continuous occurrence of charcoal. Two extra-large fire events are dated at c. 6700 and between 4500-4230 cal BP, probably enhanced by the relatively drier climate of the mid-Holocene. However, it is not clear yet if human actions formed a response to climate change or were part of social and cultural changes.

The paper raises the interesting question:

This effect has been observed before2,3,4,5 and might result from an observational limitation, i.e. the fact that Zea pollen are poorly dispersed and hard to detect6,7 in records. Alternatively, a human behavioral explanations could be invoked to suggest that either: (i) it took several phases of burning until the landscape was suitable for agriculture, or (ii) that early burning was done for the purpose of improved hunting and that the planting of crops came much later.

Another remarkable point is the peak intensity of Maize agriculture from c. 3380-700 cal BP. This time period coincides with more sophisticated pre-Columbian societies possibly practicing trade and local specialization away from the studied location. However, the abandonment centuries before the arrival of Europeans might suggest that other dynamics driving population declines or movement at this location.

Our critical discussion in the APC also raised a range of different questions:

The answers to these questions are subject to ongoing debates.