Two weeks ago I attended the biannual International Biogeography Society (IBS) conference in Bayreuth, together with 600+ other people from more than 50 different countries. This IBS conference, my first IBS meeting, proved to be an exciting event during which I met scientists from many different disciplines and heard talks on cutting-edge biogeographical research.

The IBS conference was held in the Bavarian city of Bayreuth, in the middle of the biodiverse landscape of Upper Franconia. This landscape provided the training ground for Alexander von Humboldt, the founder of the field of biogeography. The 4-day conference included a wide variety of symposia and many, many posters. The conference dinner in the German Steam Train Museum was highly memorable. The conference was closed by a lecture from Daniel Simberloff, once a doctorate student of Edward O. Wilson, who received the Wallace Award for his outstanding contributions to invasion ecology. 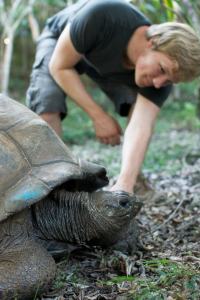 I had a talk in the plenary symposium of ‘Ecosystem response to past climate change’, organized by David Nogués-Bravo and Francisco Rodríguez-Sánchez. The symposium covered the dangers of climate change to biodiversity and tried to assess if the range and rate of adaptation, migration, persistence, or extirpation, that are registered in deep-time records, palaeorecords, and the recent past, are adequate responses for predicted climate change in the future. I addressed this issue from the point of view of a small remote island, where migration is obviously a limiting factor. I showed how I reconstructed climate and its effect on island biota during the last 40,000 years using long-term palaeoecological records from Mauritius (de Boer et al, 2013 & 2014). These records show that different climate regimes result in different ecosystem response to climate change in the past. Local extirpation or population collapse of larger vertebrates was a natural phenomenon in the lowlands of Mauritius due to frequent climate extremes (I will discuss this in more detail in my next blog; de Boer, 2015). Despite these population collapses, island biota have always (in the timeframe of my records) survived natural climate change. Therefore, my take home message was not to focus on the effects of (future) climate change alone. Other key components of global change, such as invasive species and habitat destruction, are more imminent threats to the biodiversity of many islands. For more information on my research, including publications, click here.

More information on the IBS read on (below) or visit the IBS website or blog. All abstracts and other details of the IBS conference in Bayreuth can be found here. The next IBS meeting will take place in Salvador, Bahia (Brazil) in March 2017.