The Llanos de Moxos in Bolivia is an area the size of England that has one of the highest densities of archaeological sites in the Amazon basin. I travelled there for the first time earlier this month for the fourth International Meeting of Amazonian Archaeology. As the airplane crossed from the Andes into the Amazon plains, I could tell this was a very different ‘Amazonia’ compared with the forests that I know from Peru, Ecuador, and western Brazil. The Llanos de Moxos is a seasonally flooded savanna and it was so…open! I immediately realized that the perception of ‘Amazonia’ varies widely among individuals, and I think that is one of the reasons why those of us who study the human history of Amazonia tend to disagree so frequently.

My goal this time was not fieldwork, but instead to attend a meeting of the LandUse6k South America working group at the International Meeting of Amazonian Archaeology (EIAA). Several researchers including UvA alumna Suzette Flantua presented at the LandUse6k meeting. I think we made substantial progress, and should have some papers coming out soon!

Umberto Lombardo also invited me to participate in a discussion panel at the EIAA conference with Carolina Levis and Eduardo Neves on reconstructing land-use patterns in Amazonia over the last 6,000 years (for more click this discussion panel link). The discussion was fun, and we took questions from the audience until time was up and they forced us to stop!

One highlight of the trip was getting to meet many of the people who I’ve either read their work or corresponded with over the last few years – some of whom I’ve disagreed rather strongly with in past literature. But the cool thing was that we could all come together and start a dialog that has long remained silent, and actually be friendly and have a good time in the process. It was great! 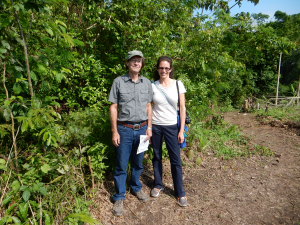 Crystal McMichael and Clark Erickson enjoy a fieldtrip to archaeological sites in the Llanos de Moxos, as part of the EIAA Conference. Photo: Suzette Flantua

Another highlight was getting to visit some of the archaeological sites and experience some of the cultural richness that the Llanos de Moxos has to offer. Umberto Lombardo and Carla Jaimes Betancourt, thanks for the invite!! Carolina Levis and Eduardo Neves, I look forward to keeping the discussion going!!

Umberto Lombardo (left) and Manuel Arroyo-Kalin (right) explain to everyone what is inside the excavation pit at the archaeological site on the forest island (photo above). Photo: C. McMichael