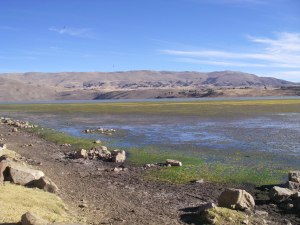 Water resources in the Vacas region (near Cochabamba, Bolivia) deminished around the time of the founding of the urban centre at Tiawanaku

Earlier this month Rachel Gwynn (Geography, UCL) visited the PCRG to use our core splitter to reveal what was contained within two cores collected from the Carribean. She has also been kind enough to provide photos of the sediments and an insight into the story so far:

Lake sediment cores covering the past few hundred to thousand years have been taken from two lakes, Wallywash Great Pond in Jamaica and Freshwater Pond in Barbuda. The sediments form part of the NERC-funded project Neotropics1k (PI Prof. Jonathan Holmes), which is concerned with climate variability in the northern Neotropics over the past millennium. The sediment cores show marked changes in composition and colour, from pale marl to dark organic mud. These colour changes, which are clearly visible in the photographs, represent changes in sediment composition that are in turn related to lake-level variations caused by long-term climate shifts. Deeper, open-water conditions under wetter climate are represented by the marls, whereas lowered lake levels, caused by direr climate, are associated with organic-rich sediments.