I discovered what I think is the first colour pollen diagram this week. Published in 1948 and still looks beautiful. 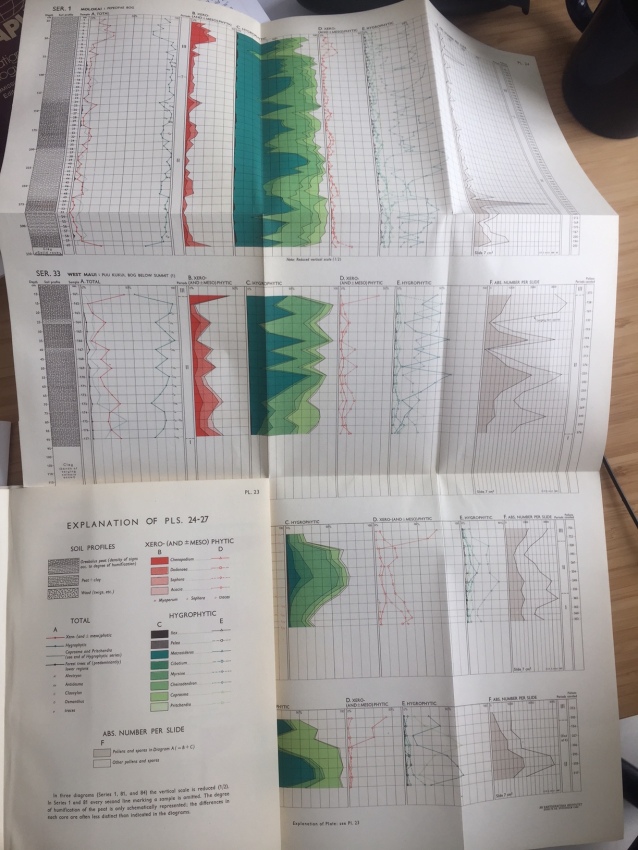 Images of the copy held at the University of Amsterdam library.

Population growth and predicted global climate change are applying new, and increasing, pressure to mountain environments, but the consequences of these changes upon the biodiverse and vulnerable Tropical Andean ecosystems are poorly understood. This thesis explores past human-climate-ecosystem interactions using multi-proxy palaeolimnological investigations (fossil pollen, spore, charcoal and Chironomidae (midges); elemental abundance, colour spectra and magnetic susceptibility) of two sites in the eastern Bolivian Andes (Lake Challacaba and Laguna Khomer Kocha Upper) over the last c. 18,000 years. During the deglaciation and Holocene ecosystems were exposed to varying climatic stress levels, and pressures imposed by the development of human cultures.

The long-term response of the terrestrial and aquatic ecosystems, reconstructed from these lakes, has provided insights into how Tropical Andean ecosystems may respond to future changes in temperature, precipitation and human interference. The palaeoenvironmental data has implications for conservation management; it indicates that spatial and temporal variations in site sensitivity, exposure and resilience should be assessed, and that planting strategies should mimic the present day natural patchy distribution of Polylepis woodlands.

To borrow a copy from The Open University Library click here.

END_OF_DOCUMENT_TOKEN_TO_BE_REPLACED

This thesis is aimed to study the paleoecology of the southern Gran Sabana region (GS; SE Venezuela) since the Late Glacial to the present. This region is characterized nowadays by the occurrence of large extent of savannas in a climate suitable for rainforests. For this purpose, three sequences (two from peat bogs and one from lake sediments) have been analyzed for pollen and spores, non-pollen palynomorphs (NPP), and microscopic charcoal particles. Among the sequences analyzed, two of them are located currently within treeless savannas (Lakes Chonita and Encantada); whereas the third one is placed in the boundary between GS savannas and Amazon forests (El Paují). The Late Glacial interval of Lake Chonita was characterized by a shrubland that was replaced by a treeless savanna at the end of Younger Dryas (YD) and the onset of the Holocene, linked to the occurrence of regional fires since ca. 12.4 cal kyr BP. The beginning of local fires was dated synchronous with the vegetation replacement, ca. 11.7 cal kyr BP. A similar shrubland, though not identical, is located nowadays around 200 m elevation above the lake, so the replacement by surrounding savannas was interpreted as a probably upward displacement of the former vegetation and an increase in average temperatures of approximately 0.7 ‐1.5ºC. This section represents the oldest interval analyzed for GS so far, and the presence of fires during the Late Pleistocene is among the oldest fire records documented for northern South America. The peat bog records of Lake Encantada and El Paují showed the main vegetation trends of the last 8 cal kyr BP, which were characterized by the continuous occurrence of regional fires. In Lake Encantada, the presence of treeless savannas was reported during the whole interval analyzed as the dominant vegetation type, despite variations in forest abundance and composition taxa of the community also occurred. The vegetation changes in this record were interpreted as mainly due to climatic shifts until the Late Holocene. At El Paují, the occurrence of forests and savanna/forest mosaics was reported during the same interval, and fire was postulated to have been the major driver of the vegetation shifts. In this sequence, a treeless savanna was not recorded as the dominant vegetation of the landscape until the last millennia, and the presence of two different indigenous cultures was postulated as responsible of the shifts in fire regime registered, with an interval of human land abandonment between them. This interval was characterized by the cessation of fires, and the establishment of a secondary dry forest. The Late Holocene was characterized, in the three sequences studied, by a sudden increase of fires, which likely favored the expansion of savannas and the establishment of the present GS landscape.

The join interpretation of the records presented in this thesis, together with previous analyses in the region, highlighted some key aspects for understanding the main trends of GS landscape and vegetation, e.g., the appearance and establishment of morichales (Mauritia palm stands typical of current southern GS landscapes) has been restricted to the last two millennia, synchronous with the increase in fire incidence. Moreover, it has been possible to gather empirical evidence for testing some previous hypothesis regarding GS. For example, the proposal of an extended aridity prior the Holocene has been rejected, whereas the hypothesis about the postglacial expansion of morichales has been supported. In this sense, with all the available information to date, some suggestions have been proposed: (i) Climate and fire have been the major forcing factors operating in the GS; (ii) During the Late Glacial and the beginning of the Early Holocene, the landscape of southern GS was likely formed by a mosaic of forests, shrubs, and savannas, without the current supremacy of the last vegetation type, which only established during the last 2 cal kyr BP onwards; (iii) Some general climatic trends have been inferred for the study area, as for example an increase in average temperatures around the Late Glacial/Early Holocene transition, a dry interval from 8 to 5 cal kyr BP, and a wetter phase during the Mid-Holocene centered around 4 cal kyr BP; (iv) The establishment of Mauritia in the region has been likely driven by a synergism between biogeographical, climatic and anthropogenic factors, as well as the likely pyrophilous nature of this palm given its synchronous appearance with the increase of fires; (v) The settlement of the modern indigenous culture (Pemón) occurred at least since around ca. 2000 cal yr BP onwards, 1500 yr earlier than previously thought, but previous human presence in the region has been also documented; and (vi) The fire activity observed in the long-term has caused a huge impact on GS landscape.

To access to this thesis PF file from the library service of the Autonomous University of Barcelona, please click here.

END_OF_DOCUMENT_TOKEN_TO_BE_REPLACED

Controversy surrounds the Quaternary palaeoenvironmental history of Amazonia. It is unclear whether moist evergreen forest, savannah or seasonally dry forest dominated the Amazon basin at the last glacial maximum (c. 21,000 years B.P.). In part the uncertainty surrounding the palaeoenvironmental history of Amazonia stems from a poor understanding of the ecological significance of the fossil pollen records from the region. In order to improve interpretations of the fossil pollen record it is essential to better understand the nature of the pollen rain produced by modern ecosystems.

In this thesis, three Neotropical ecosystems equivalent to those alluded to above were characterised by their modern pollen rain. This was achieved by examining samples collected in artificial pollen traps located within permanent (50 x 200 m) vegetation plots in the Noel Kempff Mercado National Park area, Bolivia. In each plot 10 traps were sampled for one field season (September 1998 to September 1999, or September 2000 to September 2001) and 5 traps were sampled from two additional field seasons (between 1998 and 2001). Pollen counts of at least 100 grains were made for each trap. In total 318 pollen taxa were distinguished, of which 116 were identified. The characteristic pollen from each of the three ecosystems were determined through a series of steps: spatial and temporal variations were explored using Spearman’s Rank correlations, the distinctive taxa of each ecosystem were identified using Principal Components Analyses (PCA), and the representativity of the pollen for each ecosystem was examined by comparing pollen and vegetation abundances. These analyses revealed a small number of taxa that can be used to characterize these ecosystems. Further PCA showed that it is possible to differentiate between the ecosystems by assessing the relative proportions of Didymopanax, Alchornea, Anadenanthera, Melastomataceae/Combretaceae, Moraceae/Urticaceae, Myrtaceae, Palmae, Pteropsidia (trilete), Poaceae and Solanum. These findings mean that it is now possible to detect these ecosystems in the fossil pollen record and consequently further information regarding the nature of the vegetation change in the Amazon basin can be gained.

To borrow a copy from University of Leicester Library search for my name or thesis title here (item ID 7507349613), or download directly: Volume 1, Volume 2, and CD.