Following on from Wes Fraser’s insightful and revealing interview, cactus-hugger Adele Julier tells us about her academic background and her role on the Lake Bosumtwi pollen chemistry project.

For more videos check out the “Ecology of the past” YouTube channel.

Malm and Hornborg’s paper ‘The geology of mankind? A critique of the Anthropocene narrative’ raises some important points about the terminology of climate science and how this not only affects perceptions of who or what is to blame, but also of what can be done to address  it and by who. The main thrust of their argument is that the use of the term Anthropocene distances people from the effects of man-made climate change through the argument that human nature inescapably led to large CO2 emissions and therefore the havoc being wreaked upon ecosystems is essentially inevitable. They go on to discuss that this ignores the fact that a tiny percentage of humanity actually set into motion the huge changes which we are only now beginning to address, that humanity as a whole at no point decided to take this path and that the use of the term Anthropocene is actually counter-productive, in that it removes the onus of solving environmental problems from the small group of humans that actually caused them, instead spreading it out so thinly that it loses its power.

The argument that Anthropocene is perhaps not the best term to use for the present situation is persuasive, but the idea that it apportions blame too widely does not take into consideration the fact that developing countries are now largely following in the footsteps of developed countries in terms of both habitat destruction and carbon emissions. Although all of humanity may not have started global change, the practices initiated by the few are now being endlessly replicated. The reasons behind this are economic; currently, and largely in the short term, it pays countries and large corporations to continue unsustainable practices. They ignore pressure to change if it undermines economic growth or affects profit margins, not because they do not think they are part of the problem. Academics could choose to call this the ‘Anthropocene’ the ‘OnePercentocene’ or the ‘ThisIsYourFault,Sir,Yes,YouInTheGreySuit,StopPlayingWithYour PhoneAndListen-ocene’, but it will not make the slightest difference until these basic problems are addressed.

The Anthropocene Review is a new journal focusing on the impact of humans on planet Earth through time; information on the latest publications can be found on the associated blog.

Given that much of the research we are interested in relates human-environment interactions in the past we decided to take a closer look at the range of articles being covered by this journal. Our thoughts on seven articles published in the first issue of The Anthropocene Review will appear in a series of blog posts soon. To get started here are a list of the papers we will be covering: 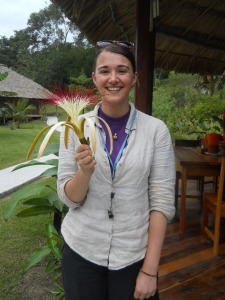 Adele Julier and a Malvaceae

Hello! I’m Adele and I started my PhD about a week ago. It’s been a little intense but I can almost find the lab without a map now, so it is probably time to introduce myself.

I’ll be studying pollen-vegetation relationships in Ghana, as part of the NERC funded project ‘500,000 years of solar irradiance, climate and vegetation changes’. This means I’ll be using pollen traps to figure out how pollen outputs vary between (and sometimes within) different vegetation types in Ghana. I will also be trying my hand at chemotaxonomy and video making. I’m heading out to Ghana (along with Phil Jardine) in just over a week to do my first lot of field work which will involve seeing the plots, collecting existing traps, replacing them with new ones, and setting up some new sites. I’m very excited.

My background is broadly botanical; I did a BA at Magdalene College, Cambridge in Natural Sciences specialising in Plant Science and then an MSc in Biodiversity and Taxonomy of Plants at the Royal Botanic Gardens, Edinburgh.

Here’s a picture of me holding the biggest Malvaceae flower I’d ever seen and being incredibly happy about that.

To find out more about me visit my blog: Plants in real life