My first AFQUA conference really began the day before the conference proper started in the Kenyan immigration queue where I met a number of fellow delegates who were flying in from all over the world.  It was great to start to put faces to names of people who’s work I had read for many years. Once out of the airport transfer to the hotel was smooth, and it was with some excitement that the following morning I made the short walk from the hotel to the famous Nairobi National Museum for the start of the conference.

Prof. Andy Cohen (one of my fellow delegates in the immigration line) kicked off the AFQUA conference with a plenary giving an overview of African continental drilling projects. He traced the dream of the recovery of long continental records back to Daniel Livingstone and Neil Opdyke’s workshop from 1980 that set out the dream of obtaining long records from the continent. He then went on to give examples of how multi-millennial lake records, including Lake Malawi, can be used to understand the tempo of ecological change. 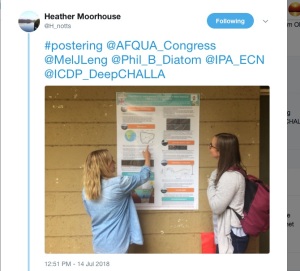 The first session of the conference, entitled “East Africa”, included: exciting evidence of Deinotherium the largest land mammal of the Quaternary (J.-P. Brugal), the use of d13C in determining homonin ecology (V.M. Iminjili), and evidence from a new c. 200,000 year old site at Natodomeri (Kenya) that contains evidence of homonids, elephids, giant lions and pigmy hippos (F.K. Manthi).

The second session of AFQUA covered “The environmental context for homonin evolution and dispersal”. This started with geochemical data from Chew Bahir that sheds light on potential drivers of climatic shifts (F. Schabitz), and included examination of changes climate between c. 500,000 and 320,000 years ago that coincided with the shift from hominid use of large cutting tools to smaller implements (R. Potts), and discussion of the environment the route which hominids took out of Africa (F. Henselowsky).